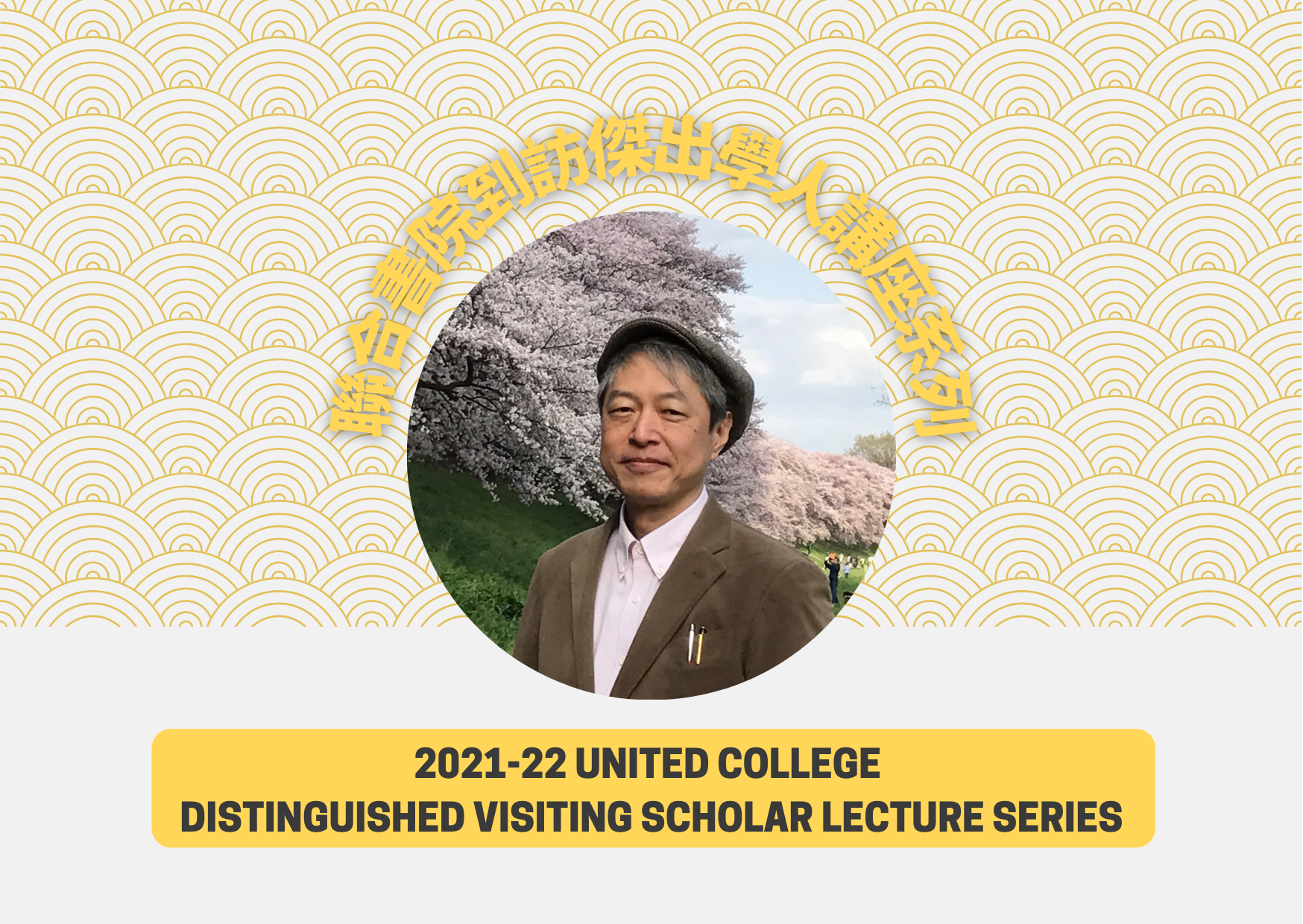 Professor Masayuki Sato delivered the second lecture, “Xunzi and Mr Lü ’s Spring and Autumn Annals during the Era of the Transformation of Political Order among the Warring States” .

United College has invited Professor Masayuki Sato from the Department of Philosophy of Taiwan University to be the Distinguished Visiting Scholar in 2021-2022. Affected by the epidemic, Professor Sato’s visit was changed to be conducted online, and the visitation was funded by the Endowment Fund of United College .

Professor Masayuki Sato was born in Kawasaki City, Japan, in 1965. He graduated from the Department of International Political Economy, Aoyama Gakuin University, Japan in 1990; obtained a master’s degree in political science from the Department of Political Science, Taiwan University in 1993; and another master’s degree in politics from Seoul National University in 1995. Furthermore, he completed a Ph.D. in Sinology from the Sinologisch Institute at Leiden University in the Netherlands in 2001, and became a visiting professor at the Harvard-Yenching Institute in the United States in 2009.

Professor Sato’s research fields include early Chinese political philosophy with Xunzi as the focus, and the study of Chinese philosophy in modern Japan. Professor Sato examined the methods and main viewpoints of Western scholars studying Xunzi, as well as the possibility of reassessing the Confucian self-cultivation theory with the key concepts of ritual and social norms. Professor Sato is well-known for his research in the field of early Chinese philosophy, and his works had a huge impact in the realm.

During the visit, Professor Sato delivered two public lectures. The topic of the talk on 18 October was ” The Development of Xunzi Studies for the Past 300 Years in Japan and its Contemporary Significance “. To elucidate the significance of Xunzi’s thought in the intellectual and liberal arts tradition of contemporary East-Asian societies by delineating the process of the development of Xunzi studies for the past 300 years of Japan. In its development, the following three points were highlighted by Professor Sato: Firstly, the import and development of Xunzi’s studies have facilitated the formation of a Japanese society being ruled by li (ritual and social norm). Secondly, the understanding of Xunzi’s thought by Meiji intellectuals has worked as a medium for importing a Western scholarly method known as “philosophy”. Thirdly, the Japanese Xunzi studies of the 20th century have clarified the point that the doctrine known as “Human nature is bad” in Xunzi’s thought actually does not mean “The innate essential human nature is bad.” Based upon these three observations, the lecture maintained that the importance of Xunzi’s thought for East-Asian intellectual and liberal arts tradition for the 21st century was still significant.

The second lecture “Xunzi and Mr Lü ’s Spring and Autumn Annals during the Era of the Transformation of Political Order among the Warring States” was held on 21 October, Professor Sato stated the year of 221 BCE as the end of the Warring States period. Referring to historical records, Professor Sato also pointed out Zhou Dynasty has been demised far before that year, which is in 256 BCE. In the same year, the State of Lu was also conquered by the State of Chu. Professor Sato then pointed out this “interregnum” of 35 years as the “post-Zhou-Lu Era” in which the King of Qin started to behave as the “de facto” Son of Heaven, and as such interacted with other feudal lords. Taking into consideration such an inter-state situation, Professor Sato recognised the unique historical significance of the advent of two political philosophies, i.e., the Xunzi and Mr Lü’s Spring and Autumn Annals (hereafter, LSCQ). Professor Sato proposed a viewpoint that the LSCQ was written and compiled to provide the King of Qin with both theoretical basis and concrete action plan for enabling him to elevate his status from a “de facto” Son of Heaven up to a genuine one. On the other hand, Xunzi more or less hoped that the Qin ruler would fulfill his political theory to become the ruler of the whole Chinese world. Nevertheless, the King of Qin was also admonished for any further military invasion against other Warring States which were expected to hinder Qin’s endeavor for that purpose.

After the two lectures, Professor Sato sent his collection of Nakamura Masanao to the College as gifts. The College thanked Professor Sato for his generosity and Professor Ho Che-wah for the nomination and support to the visitation activities.

News from the College Board of Trustees

Be With You – United College 65th Anniversary Souvenir Fundraising Campaign

Trace the History and Culture of CUHK by Footsteps