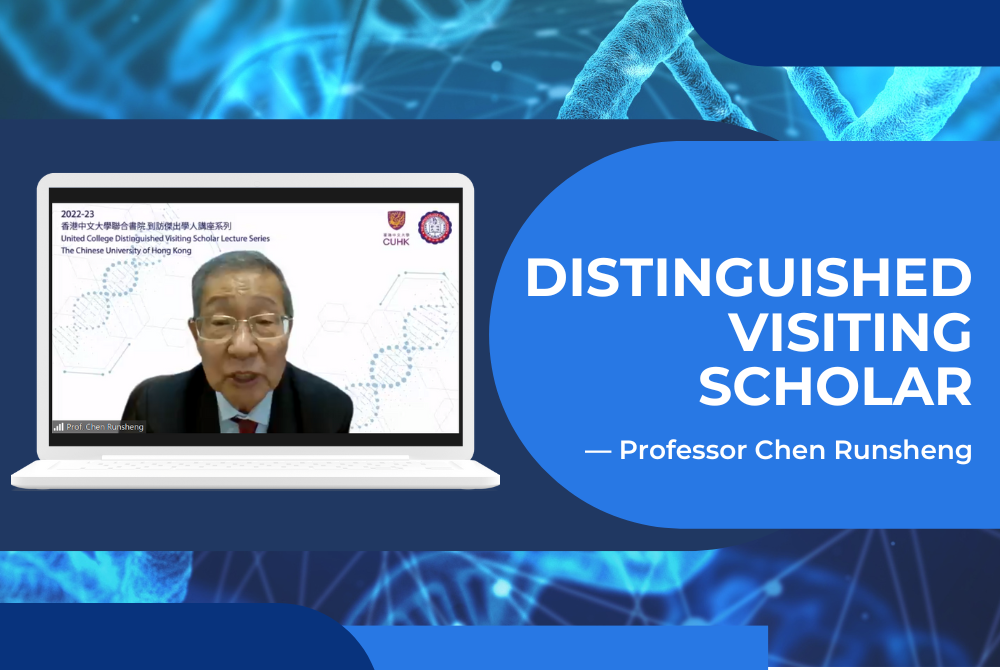 United College has invited Professor Chen Runsheng from the Institute of Biophysics, Chinese Academy of Sciences, to be the Distinguished Visiting Scholar in 2022-2023. Affected by the epidemic, Professor Chen’s visit was changed to be conducted online, and the visitation was funded by the United College Endowment Fund.

During the visit, Professor Chen delivered two online lectures, in which attracted close to a thousand participants. The topic of the talk on 18 October was “AI and Big data in Precision Medicine”. In this lecture, Professor Chen shared his research results in detail, including how to use artificial intelligence (AI) to interpret big data and DNA sequences, and apply it in the fields of disease diagnosis, patient treatment and drug development. Professor Chen mentioned that the instruments for detecting sequences are changing rapidly, and the results of DNA sequences are becoming more accurate and faster. Scientists nowadays are working hard to grasp the biological significance of DNA sequences and differential changes between sequences.

The second lecture “COVID Vaccines and Nucleic Acid Drugs” was held on 20 October. Professor Chen gave a detailed introduction to nucleic acid drugs and the general directions that can be applied in the future. In 2019, the global outbreak of the new coronavirus did not have corresponding drugs at first, experts in medical field had no solution at all. Professor Chen further explained the reasons why China was able to decipher the genetic code of the virus in less than a month and disclose it to the world. He also illustrated the direction of future application of nucleic acid drugs in the last part of the talk. 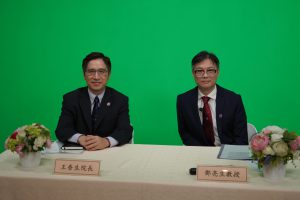 Professor Chen Runsheng graduated from the Department of Biophysics of the University of Science and Technology of China in 1964 and engaged in research work in the Institute of Biophysics, Chinese Academy of Sciences since then. From 1985 to 1987, he was selected as a Humboldt Fellowship Visiting Scholar to involve in the electronic structure of biomolecules research at the University of Nuremberg, Germany. He then collaborated with Hong Kong University of Science and Technology, The Chinese University of Hong Kong, Osaka University in Japan, University of Nuremberg in Germany, University of California (Los Angeles), Harvard University and other institutions in many research projects. At the 15th Committee on Data for Science and Technology (CODATA) Conference held in Tsukuba, Japan in October 1996, Prof. Chen was awarded the “Kotani Prize” and was invited to give a memorial lecture on  “From DNA Sequence Data to Protein Three-dimensional Structure”. Professor Chen has received numerous awards and honors over the years, including  academician of the Chinese Academy of Sciences in 2007, the Ho Leung Ho Lee Foundation Prize in 2008, the “Tan Jiazhen Life Science and Achievement Award” in 2012, the State Scientific and Technological Progress Award (SSTPA) in 2013, and academician of International Eurasian Academy of Sciences in 2014. Professor Chen is currently a researcher and doctoral supervisor of the Key Laboratory of Non-coding Nucleic Acids in Institute of Biophysics of Chinese Academy of Sciences, member of the International Human Genome Organization (HUGO), the Committee on Data of the International Science Council (CODATA), and the International Union of Pure and Applied Physics (IUPAP).

Professor Chen is a pioneer in bioinformatic research in China. His research contributed to the whole genome assembly and annotation of various genome projects, such as The Human Genome Project. Subsequently, he investigated into the field of noncoding RNA and established a new paradigm of noncoding RNA as an essential genome element in living cells.

The College thanked Professor Chen Runsheng for giving public lectures in the capacity of Distinguished Visiting Scholar, and Professor Nelson Tang for the nomination and support to the visitation activities. 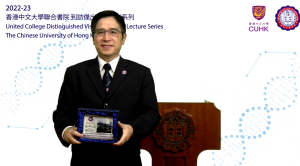 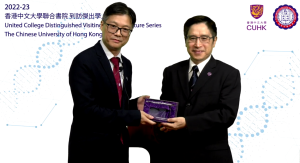